City Grill — The Sports Bar With The Authentic French Twist 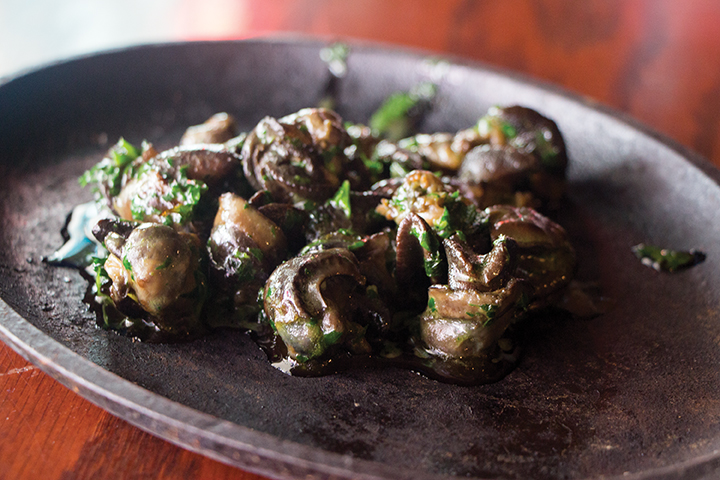 “Bonjour, Mes Amis,”says City Grill owner Eth (he goes by Eric) Thueltrouve to a couple of his regulars as they cozy up to the bar at the popular local Gastro Pub, located in the Village Market plaza at the intersection of Bruce B. Downs (BBD) Blvd. at S.R. 54, right off of the S.R. 54 exit of I-75. “Comment ça va?”

The nicely dressed couple, which later admitted that they never spoke a word of French before they started hanging at Eric’s restaurant and night spot, responded, “We’re good, monsieur. Thanks for asking.”

In other words, you don’t have to speak a word of “la langue” in order to become a regular at City Grill, which Eric took over a little more than a year ago. Whether you’re looking for a sports bar with great burgers, wings and sandwiches (and equally great beer/drink prices) or you’d like to sample a little of “Le Coin du Eric” (which literally means “Eric’s corner”), a section of City Grill’s new menu that offers everything from truly “autentique” escargots (yes, those are snails pictured above) with a garlicky butter sauce (similar to what you’d find in a fine French restaurant in Paris, New York or in Eric and his wife Gigi’s hometown of Lyon, France), to what Eric calls a French bar food favorite, “Croque Madame,” which is basically a grilled ham and cheese sandwich topped with a sunny side up egg. Merveilleux!

“Le Coin” also includes a “Croque Monsieur,” which is the same ham and cheese “sammy” without the egg; a “Burger d’Eric,” also topped with egg; “Poulet Basquaise” (chicken Basque style), cut up pieces of chicken topped with onions and peppers; a great “Salade Nicoise” (which comes with anchovies on the side; for semi-adventurous types, I promise the salad tastes better with them than without them); and one of the best steak “au poivre” (with a crispy peppercorn crust and a zesty brown sauce with still more peppercorns; it’s not as spicy as it sounds, but it is “délicieuse”) entrées in the Tampa Bay area. And, I defy anyone to find another steak au poivre anywhere in our area for only $14.999 (the huge order of escargots and the poulet Basquaise also both cost just $14.99 each).

For those who only eat “pommes frites” if they’re called “French fries,” City Grill does have many other great menu options. Everyone’s favorite starter seems to be the Cuban cigars, which are crispy “legally rolled” wontons stuffed with mojo pork, smoked ham, Genoa salami, Swiss cheese and pickles, served with a “special” sauce.

The gator bites are served with a sweet & spicy Thai chile-style sauce and the wings are always crispy and juicy. I can’t eat the shrimp, but graphic artist Chelsie Rosatone and assistant editor Matt Wiley agreed that they were delish. Oyster lovers can try freshly shucked Gulf oysters on the half shell served with a “Bloody Mary” sauce. I also am a big fan of the ahi tuna lettuce cups, the cobb salad and Chelsie enjoyed the southern (fried) chicken salad.

In addition to great burgers, we’ve also enjoyed City Grill’s variety of sandwiches, with our favorites being the drunken chicken (with tequila lime sauce and corn salsa), the fried chicken & Belgian waffles, Buffalo birdie and the corned beef Reuben.

City Grill’s new Lunch Menu includes the tomato basil flatbread, plus a grilled cheese BLT, tuna salad on rye, fiesta chicken lettuce cups, chicken tacos, a chef wrap and hamburgers, all served with chips or salad for only $6.99 each ($7.99 if you want a cheeseburger). There’s also a “You Pick Two,” featuring your choice of the soup of the day, four different (half) sandwiches and three different salads.

On Sundays, 11 a.m.-3 p.m., City Grill also has rolled out its Sunday brunch, where you have five different choices, from the Croque-Madame to two different kinds of omelettes, all served with home fries or cheese grits, and all for just $9.99 each. I haven’t sampled the new brunch yet, but Eric says “People really zeem to enjoy it.” You also can get two Bloody Marys for just $6.99 on “Sunday Bloody (Mary) Sunday.”

City Grill’s kids’ menu items are all just $5.99 for quesadillas, chicken tenders, ham/cheeseburgers, grilled cheese or mac & cheese or $6.99 for four different kids’ wrap sandwiches, all served with fries or salad and a kids’ drink.

Yes, like other “sports bars,” City Grill also has plenty of TVs for watching sports, as well as a pool table, but it’s also Wesley Chapel’s best-kept entertainment secret, with different options six nights a week and “Sunday Football Funday” all day on Sundays during the NFL season.

Mondays are Open Mic nights, there’s Team Trivia (with bar tabs to the winning teams) on Tuesday nights, karaoke Wed. & Thur. (Thur. also is Bike Night)and live bands Fri.-Sat. Gary Carmichael of Heart & Soul Karaoke, who has the biggest selection of karaoke songs this reporter has ever seen), always makes sure he gets new singers into the rotation as quickly as possible, although he does have plenty of “regulars.” Eric was thrilled with the results of his first ongoing karaoke contest a few months ago, so now, every Wed. is a one-week contest where first prize is a $25 bar tab each week.

City Grill also has hosted Latin Nights (the most recent was Sept. 12), with salsa dancing by Carlos. Stay tuned for updates on future Latin Nights and other special events, like the recent fund-raising event which raised thousands for City Grill regular Charlie Kelly. The event attracted hundreds of people and Eric and Gigi donated every dollar they made on alcohol and food sales to pay for Charlie’s needed heart surgery.

City Grill is located at 5429 Village Market. It is open seven days a week for lunch and dinner. For more info, visit CityGrill.us or Facebook.com/CityGrillWesleyChapel or call 973-9988. 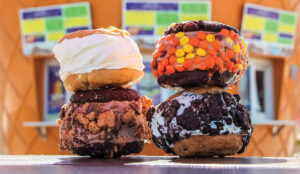