Help is coming quicker for the SR 56/I-75 interchange…but quick enough?

Folks tired of pulling their hair out during frustrating morning and evening drives through the I-75 and S.R. 56 interchange got some good news recently when the Florida Department of Transportation said they will be speeding up construction to help alleviate the congestion, but that it likely not soon enough to make local drivers happy.

FDOT will be adding construction of a diverging diamond interchange (DDI) to its current five-year work plan. Construction on the interchange should begin in 2020 instead of 2024, as previously announced.

FDOT is banking on the DDI to relieve the traffic flow. There is an entire website devoted to explaining why the DDI is better and safer than other diamond-shaped interchanges (divergingdiamond.com), and it touts benefits like almost half as many conflict points as conventional diamond interchanges, better sight distance at turns and positive response from the public.

Florida is building its first divergent diamond at the I-75 and University Parkway interchange in Sarasota. To see a video of how it works, read the online version of this story at NTneighborhoodNews.com.

Is 2020 soon enough to placate many of the 55,000 drivers daily that pass through interchange from the east, or the 45,000 coming from the west?

District 2 Pasco County Board of County Commissioners member Mike Moore was happy to see FDOT adjust the construction timetable, but says he is still not as happy as he would like to be. With a 2020 start, construction could take another two or three years.

“Obviously, the future is now. The traffic is here now,’’ said Commissioner Moore.  “It got moved up, but I’d like to see the design phase wrapping up in 2017 or so, with the construction phase completed by 2019, 2020.”

FDOT, however, is saying the project will begin in 2020. It presented its new plan, which has a price tag of $8-10-million according to Moore, to Pasco commissioners at a Pasco Metropolitan Planning Organization (MPO) meeting in Dade City Nov. 9.

The S.R. 56/I -75 interchange continues to be a bone of contention for those in the New Tampa and Wesley Chapel area, and the 2.3-mile-long northbound exit routinely experiences back-ups a mile or so long, sometimes even reaching the I-275 apex at the Pasco County line. With the opening of the Tampa Premium Outlets on S.R. 56 west of I-75, that traffic is expected to worsen during the holiday shopping season.

The S.R. 56/75 interchange was opened over a decade ago, and in 2011 a new ramp was constructed to ease congestion, to the delight of many in the community. However, the two-lane exit is plagued by long lines of vehicles waiting to exit left or right (east or west) onto S.R. 56.

For Steven Domonkos, those numbers make it clear that 2020 is not soon enough to make the changes.

“I’m just kind of surprised that FDOT is so far behind the 8-ball on this,’’ said Domonkos, the Greater Wesley Chapel Chamber of Commerce (WCCC) Economic Development Committee chairman. “This is not like we didn’t know the outlets and (Wiregrass) mall were coming to the area.  Not addressing the traffic situation until now is just sort of confusing.”

Domonkos is part of a new three-person transportation task force recently formed by the WCCC. He said the goal of the task force is to gather information and concerns from residents and to “make sure we have a seat at the table” so those concerns can be passed on to FDOT.

Domonkos, who is also the specialty leasing manager for the Shops at Wiregrass Mall, is disappointed at the negative effects he says traffic at the interchange, and in general around the Wesley Chapel and New Tampa area, is having on local businesses.

“We’re getting complaints, we feel like it’s hurting Wesley Chapel, and hurting businesses,’’ Domonkos said. “We definitely plan to make our presence known.”

Domonkos is open to the idea of a DDI. Otherwise, he’s not sure what the solution is.

“I’m not sure there is an answer at this point,’’ he said. “I think the (DDI) will work, but now it’s just a matter of getting FDOT to move the timetable on that.”

Moore said he also is not done pushing a more immediate timetable.

“We’ve had a number of citizen complaints about (the interchange),’’ Moore says. “People need relief in this area. We did express to FDOT we would like the project accelerated.”

Moore said state Rep. Danny Burgess (R-San Antonio) also is pressing the issue, and both are in constant contact with other members of the state legislature to attract allies for future discussions.

“The (DDI) concept is really cool,’’ Moore said. “One of the things we don’t want to do (when it comes to funding) is be detrimental to the other projects that have been on the plan. We don’t want to hinder those. But we need this sooner than later.” 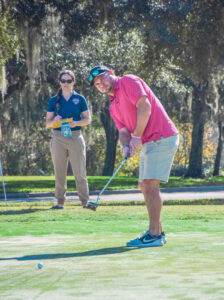