On an April Sunday morning twenty years ago, the Rev. Larry Hooper led a joyful procession of Grace Episcopal Church’s congregation from their temporary home at Tampa Palms Elementary to the Promised Land at the confluence of Bruce B. Downs (BBD) Blvd., Tampa Palms Blvd. and Amberly Dr., where their newly constructed worship building was completed.

Parishioners’ spirits were similarly raised, along with some earth, on June 3 while breaking ground on Grace’s new sanctuary, in a ceremony that united members of New Tampa’s religious and civic communities in celebration.

Referred to as the “Amazing Grace Building Project,” the finished structure will provide 4,500-sq.-ft. of worship space for the church’s 300 parishioners. It is being built by Waterford Designs, Inc. at a cost of $1.5 million.

Etta Green, chair of the Amazing Grace Visions capital campaign, expresses optimism that the labor will be finished in time to celebrate the birth of Jesus Christ.

“We’re hoping it will be done by Christmas,” she says.

So far, the capital campaign has raised more than $160,000 of a $450,000 goal, according to Green. Parishioners have the opportunity to contribute to the campaign through donations which can be designated to specific spaces or needs of the project, such as its nursery, carillon or even individual pews, bricks and benches. The remaining cost is being funded from cash the church has on hand.

The groundbreaking was presided over by the Rt. Rev. Dabney T. Smith, Bishop of the Episcopal Diocese of Southwest Florida. Featured speakers celebrating the occasion included Tampa Mayor Bob Buckhorn, who was introduced by Luis Viera, a Hunter’s Green resident who represents New Tampa’s District 7 on the Tampa City Council

“Communities are defined by their institutions and this church is a great strength and support to the families of New Tampa,” said Viera. Grace’s current Rector, the Rev. Canon Benjamin Twinamaani, known affectionately as Fr. Benjamin, served as the event’s master of ceremonies.

Grace Episcopal Church had its genesis in 1992, when it held its first services in a storefront in the nearby City Plaza at Tampa Palms shopping center. It was one of the few places of worship in New Tampa at the time, and Mayor Buckhorn recognized the relationship between the church and the community it has served in the 25 years since then.

“We have watched the amazing growth of this community and this church has been an important part of the growth of Tampa,’’ Buckhorn said. “Go make us proud; continue to grow and continue to prosper.”

The event was a bit of a homecoming for Shawn Harrison, who represents District 63, which includes most of New Tampa, in the Florida House of Representatives. He is a former parishioner of the church who said he recalls the relationship between Grace Episcopal and Tampa Palms, which donated land for the church. “This has always been the little community church of Tampa Palms,” Rep. Harrison said.

Bishop Smith turned the soil at the place where the sanctuary’s future altar will be. As he did so, he noted the significance of the occasion, which he referred to as “a moment of aspiration for the church. What we are doing today in simply turning dirt will create a space of transcendence.”

Among members of the congregation who gathered for the groundbreaking, the consensus is that Grace Episcopal is, above all, a welcoming place.

Bernard and Nancy Guss are founding members of the church, and also are a mixed-religion couple. Bernard is Jewish and Nancy is Episcopalian. They say Grace has been a spiritual home that has accommodated both of their respective beliefs.

“Nancy and I visited several churches before coming here,” Bernard said. “We felt like it was open to a variety of beliefs. It’s truly a unifying place where I have felt welcome.”

Zainaba and Charles Forster are both from the West African nation of Sierra Leone who now make their home in Heritage Isles. Charles said that Grace Episcopal Church is a tranquil place that is always open. “It is indeed what church is supposed to be,” Charles said.

The Forsters were married by Fr. Benjamin, who has been the church’s spiritual leader since 2005. Fr. Benjamin, who is known throughout the New Tampa area, considers the new sanctuary to be a tangible expression of Grace Episcopal’s commitment to the local community.

“We are renewing our identity as a church that anchors the community,’’ Fr. Benjamin said. “In today’s world, we need that.” 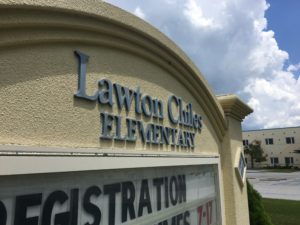