“We are now at 100-percent occupancy,” Tampa Premium Outlets (TPO) general manager Stacey Nance told me at the July 20 ribbon cutting event for the new Kate Spade store (photo) in TPO. “How many malls can say that?”

In addition to Kate Spade (see below), Nance says the remaining three slots at the outlet mall also are all now taken — True Religion Designer Jeans & Clothing, Salt Life and the Man Cave Store, which has been a hit at other Simon malls with billiards tables, Harley Davidson gear, Mr. Beer and more.

But, there’s no doubt that a lot of people — dozens were on hand during or shortly after the store’s ribbon cutting to check out the deals — are excited about the high-end handbags, wallets, clothing and accessories at Kate Spade, the store chain that the late designer Kate Brosnahan and her husband Andy Spade (the brother of actor/comedian David Spade) created as Kate Spade New York in 1993, combining her first name and his surname. The couple had sold all of their interest in the brand to Nieman Marcus by 2006, which then sold it to Liz Claiborne that same year.

Of course, Kate was found dead in her apartment on June 5 of this year, by her own hand, leaving a note for her daughter Frances.

“We signed this lease in December,” Nance, an admitted fan of the brand, said. “And we’re really excited that Kate Spade is open.”

Get Ready For The Hyatt Place!
“We know there’s not enough hotel rooms in Wesley Chapel right now,” says Karen Martin, the director of sales for the new 132-room Hyatt Place hotel on the north side of S.R. 56, next to Bahama Breeze, which had its “soft” opening on July 31. “But, it’s about to get a lot more fun out here.”

Martin says that although the six-story hotel just opened, “My phone’s been ringing off the hook for weeks, especially with people booking rooms for tournaments at the hockey rink (Florida Hospital Center Ice, located just east of I-75 on S.R. 56, while the Hyatt Place is just west of the interstate).

Although Martin says the new Hyatt Place doesn’t have full Hyatt resort amenities, it does have a Gallery restaurant and bar, a separate breakfast area, an outdoor swimming pool, nice fitness and business centers and meeting spaces with built-in audio/visual features.

The adjacent Sierra Conference Center has a really nice ballroom that Martin says can seat about 350 people with tables in a banquet setup and can be subdivided into three smaller ballrooms, which can each seat at least 250 people each in a theatre-style seating set-up. Martin says she also loves the conference center’s adjacent break-out and outdoor seating areas.

“But, to really get a feel for whether or not we should be hosting your event,” she says, “you should come out and take a tour. We’re all really excited to be open.”

She adds that the hotel hopes to host an upcoming “Final Friday” networking event for the North Tampa Bay Chamber of Commerce and is planning “a big Grand Opening event sometime in November.”

We’ll have updates about the Hilton Garden Inn & Residence Inn hotels coming soon to S.R. 56 in our next issue.

• I can’t even tell you how excited my taste buds are now that Taste of New Tampa & Wesley Chapel favorite Nothing Bundt Cakes has opened across from Noble Crust in the Shops at Wiregrass mall. Whether you love red velvet or dark chocolate cake with extra creamy white icing, or the decadent white chocolate raspberry bundt cake, Nothing Bundt Cakes will have you salivating for more.

Check out a free sample when you visit and please tell the staff that you read all about them in the New Tampa Neighborhood News!

• I also was sad to hear, despite owner Ramses Garcia’s best efforts to negotiate a new lease with his landlord, that Las Palmas Spanish Café, the Latin/Cuban favorite located behind Kobe Steakhouse in the Pebble Creek Collection on Bruce B. Downs Blvd. (a mile south of County Line Rd.), had closed.
Garcia had been talking to me for several months about how hard it had been for the businesses in the plaza to stay afloat, with the Bruce B. Downs widening construction still ongoing in front of the plaza, but he was still hoping to work things out less than two weeks before he announced the closing on Facebook. Will Garcia reopen in another location? We’ll keep you posted!

• Meanwhile, congratulations go out to my friends Travis and Fiona Monday, the owners of Fit 4 Life Personal Training & Physical Therapy Studio (17419 Bridge Hill Ct. in Tampa Palms), who celebrated the studio’s 22nd year in business with another great Martini Party, catered by the nearby Stonewood Grill & Tavern, on July 20. 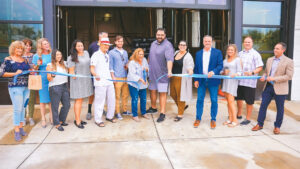