Do Not Miss The First New Tampa Brew Fest On Nov. 10!

When I was at the University of Florida, I remember asking a friend after at least six hours at a dorm party, “So, how much beer is too much beer?”

His response was, “The question is, how much beer is enough beer?

Well, those who attend the first-ever New Tampa Brew Fest, presented by Kling Law of Tampa, on Saturday, November 10, 6 p.m.-10 p.m., at the Venetian Event Center in front of St. Mark the Evangelist Catholic Church (9724 Cross Creek Blvd.), may actually be able to answer both of those questions. (kidding)

Hosted by the Rotary Club of New Tampa Noon (the club I belong to), which meets Wednesdays at noon at Mulligans Irish Pub inside the Pebble Creek Golf Club, this first-ever New Tampa Brew Fest is likely to become an instant classic.

Thanks to the efforts of club members Jeff Ulbrich, Lisa Hickey, Dr. Steve Dau and multiple others, the Brew Fest will feature at least 75 different craft and brand-name beers including (but not limited to; more may still be added):

Tickets to the New Tampa Brew Fest have been reduced to just $25 per person and that includes as many samples of all of the great beers that will be on hand as you desire.

The food trucks listed below will not be inside the event (the food will not be included with the cost of your Brew Fest admission) and each truck charges different prices for the different kinds of food they serve.

Kling Law will be providing FREE Uber rides home for any Brew Fest attendees who need them and designated driver attendance tickets cost just $20 apiece for those who want to check out the event without sampling the beers. And of course, you must be at least 18 to attend and at least age 21 to drink any of the brews at the event.

Best of all, the net proceeds from the New Tampa Brew Fest will benefit the New Tampa Noon Rotary Foundation, which supports and does service projects to benefit organizations that serve U.S. military active duty and veterans and other first responders, as well as schools, the elderly and service projects from Fire Station No. 20 on BBD to as far away as India, Nepal and Kenya. Rotary International, the world’s largest service organization, with thousands of clubs and more than 1 million members worldwide, is also the organization that is within just a few cases a year (in mainly war-torn, impoverished countries) of completely eradicating polio (which once crippled and killed hundreds of thousands of people worldwide per year).

And, Outside The Brew Fest, These Food Trucks Are Scheduled To Be On-Site! 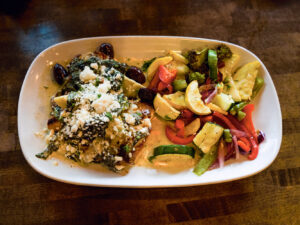