Book It! Elaine Feaster To Receive Student Of The Year Award

It started out as a little box, meant to hold 175 books, to be distributed to those who needed them

In just two years, however, it has turned into something so much more.

Her impact led her to be recognized by the Hillsborough County Council Parent Teacher Association/Parent Teacher Student Association (PTA/PTSA) as their “Middle School Student of the Year.”

And, the awards keep getting bigger.

Just a few weeks before she is to begin high school, Elaine will be honored with a state-wide designation when she receives the Florida PTA Student Advocate Award, which is given to one middle school student in Florida who through his or her creativity, leadership and dedication, has positively affected policy or change in their school or community in a way that aligns with PTA’s mission and goals.

Feaster will receive her award at the Florida PTA Award Celebration Luncheon on Saturday, July 20, in Edinburgh Hall at the Innisbrook Golf and Spa Resort in Tarpon Springs.

“When I found out, I was just like, wow,” Elaine said. “I was surprised. But I am honored. It makes me feel good that even though I never thought of getting awards for this — it’s not why I did it — it’s nice to be recognized. No matter how young you are, you can make an impact in your community.”

As Liberty PTSA president Shari Burress explains, Elaine’s project was one of the main reasons why she was chosen for the award.

“It just keeps blossoming and growing, and she just keeps taking it on,” says Burress. “She doesn’t think twice, and she never complains about the work. She’s always looking for the next opportunity to help.”

Ellen Lyons, the 2018-19 vice president of council operations for the Hillsborough County Council of PTAs/PTSAs, was responsible for overseeing the awards process.

She says she didn’t personally judge the category that Elaine won, but she speaks on behalf of all of the judges who did review the Middle School Student of the Year nominees.

“There were many outstanding applications,” Ellen says. “It was an embarrassment of riches to see how many quality students there are doing great things in the schools.”

She says Elaine’s project stood out because of her collection site at the New Tampa Family YMCA, which the judges thought was a smart strategy, and her strategy to get the books into the hands of students who need them the most.

“It was well executed,” Ellen says.

Elaine, a volleyball player for years at the YMCA, was volunteering as an assistant coach and set up a site for book donations, which she figured she could empty each week when she went there for games.

She was stunned, though, that the large box was overflowing every time she showed up. “I would collect all the books (after each game) and put them in the car, and the next week, there’d be more books,” Elaine says. “It was an exciting feeling that the community was helping.”

Elaine’s mom, Jane, says one reason Elaine was so passionate about her project is that she had a lot to overcome to be a successful student.

“I’m very proud of Elaine and all that she has accomplished,” says Jane. “Back in elementary school, she was diagnosed with a reading disability. I was very concerned for her going into middle school being a number and another face in the crowd. I couldn’t be any happier with what the school and the administration and teachers and what they’ve done for her. She’s a different kid from when she entered to when she’s leaving. It’s remarkable.”

Elaine has become well known for her project. In fact, even when the initial project was completed for her Girls Scout silver award (she is in Troop 1247), people kept asking if she was still accepting donations.

“Our garage was filled with books,” says her mother Jane, laughing. “We still have probably 300 books in there right now.”

No matter who asked, Elaine simply couldn’t say no.

“Elaine has a really kind heart and is always thinking of others,” Burress says. “She’s very involved at the school and is one of those kids who other kids look up to, as far as what’s the right thing to do.”

“Elaine’s a phenomenal student,” he says. “She’s respected on campus by her peers and by the faculty and staff. She has a heart for service, and that’s her passion.”

He also describes Elaine as humble and says she doesn’t seek attention for the good things or works she does.

In addition to winning Hillsborough’s Middle School Student of the Year Award, Elaine was recognized with a “Certificate of Excellence” from the Prudential Spirit of Community Awards because her volunteer activities were judged to be among the top 10 percent of all those considered in the State of Florida.

Also, based on the number of volunteer hours she performed, Elaine received the “Presidential Volunteer Service Award” and a letter from the White House.

She says she’s simply trying her best each day to be a good student and a good friend to all those around her.

Elaine isn’t done with her book project. She intends to continue in Girl Scout Troop 1247, which meets at St. James United Methodist Church on Bruce B. Downs (BBD) Blvd. in Tampa Palms. As a high school student, she can begin work on her Gold Award.

Her summer project included creating a website — ScoutingForBooks.com — and she now puts a stamp on the inside of each cover that says “Read. Share. Repeat.” with the website’s URL.

She wants her project to have a lasting impact, and hopes that those who read the books she has collected will notice the stamp and pass them on to others.

Elaine is happy that her project touched so many lives, but she encourages those around her to realize they don’t need a big project to have a positive impact.

“There are different ways that you can make a difference,” Elaine says. “It doesn’t matter how big or small, as long as you made an impact on one person’s life. For me it’s thousands of books I donated to children, but also the ways I’ve helped people at my school by being a good friend to everyone.” 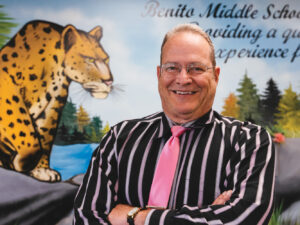 Sanders’ Retirement Is The End Of An Era At Benito 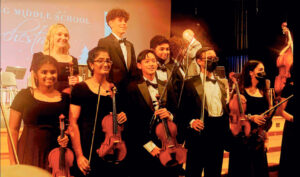 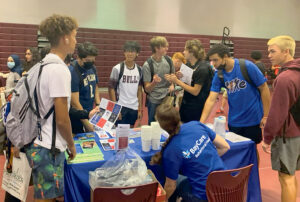