In Pasco County, learning doesn’t stop when the bell rings at the end of the school day. From robotics to clay sculpting, and from Spanish to Zumba, students in several schools will again have access to innovative options after school that are fun and engaging, focused on skills the students want to acquire.

Two such pilot programs are being expanded onto three more Wesley Chapel campuses for the 2019-20 school year. Pasco County’s successful “Explorations” program for elementary school students will be offered at Seven Oaks Elementary and “Beyond The Bell” for middle school students will be offered at both John Long and Thomas Weightman middle schools.

For parents of middle school students who previously did not have an on-campus option for care after school, Beyond The Bell brings a program that keeps kids active and engaged after the school bell rings. It was started in two Pasco County middle schools (Rushe and River Ridge) last year, both located outside of Wesley Chapel.

Beyond The Bell is a fee-based program that is available every day from the time school gets out (which may vary) until 6 p.m. “Students get group tutoring by certified teachers, ‘techno time,’ where they work on projects or research, plus clubs, socialization and enrichment programs, which change every seven weeks,” says Carlotta Mathis, the Enrichment Specialist in Pasco County’s After School Enrichment Programs department. “That enrichment is everything from hip-hop and jazz dance, to robotics, to life skills.”

She explains that a wide variety of life skills are taught, such as home economics, culinary skills, babysitting and even staying home alone, as well as economics and math, where students are taught basic banking, including how to write a check and balance a checkbook.

Each school will offer both physical activities, such as sports and dance, and life skill enrichments, plus STEAM activities such as robotics. Students will be offered all the different units at some point throughout the school year.

“Our pilot program went well and we had good numbers, (last year)” explains Mathis. “There were relationships built with school staff and students, engaging activities going on all the time, and we felt like it was time for us to move it to the next level.”

While Beyond The Bell is expanding at the middle school level, Explorations is expanding to a new elementary school.

Explorations is a program that started at Wiregrass Elementary last year, giving students who did not need full-time care after school the opportunity to participate in a weekly enrichment class immediately after school, available four days each week.

Students attend just one  or two afternoons per week and learn skills and topics that are asked for by families at the school. In fact, the idea to bring Explorations to Seven Oaks came from a parent.

Seven Oaks principal Shauntte Butcher says parent Senthil Sundaresan requested the program after hearing it was offered at Wiregrass. “He wanted something really fun, that looks more like a club,” Butcher explains.

As working parents, she says Sundaresan and his wife were looking for more activities to be available on campus for students. Instead of picking children up from school, taking them to some kind of class, sport or enrichment activity, and then picking them up there, the Explorations program allows kids to enjoy a worthwhile activity and parents just one pick-up time and location.

“(Explorations) is a win-win for parents and students,” says Butcher. “It’s something fun after school and another learning activity that helps make children more well-rounded.”

She says students at Seven Oaks will be able to choose from a variety of after-school classes that will include dance, Spanish, cooking, sports, coding/robotics and Zumba. Each class lasts for seven weeks and the classes offered change each quarter.

While these programs are being expanded into three more Wesley Chapel schools, there is still more room for growth. Mathis is willing to expand her office’s programs to other schools, if the principals want it and if surveys show that parents are interested.

To view all of the available programs and register for those that are currently open, including Explorations at Seven Oaks and Wiregrass elementary schools, plus Beyond The Bell at John Long and Weightman middle schools, visit Pasco County Schools’ department of After School Enrichment Programs (ASEP) at myASEP.com. 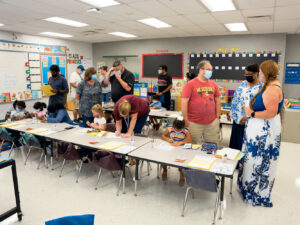