Prime Rx Pharmacy Fills Your Prescriptions With A Personal Touch!

Prime Rx Pharmacy in the Cross Creek Center plaza on Cross Creek Blvd. in New Tampa has only been open for three months, but owner Vikas Ghiya, R.Ph. (Registered Pharmacist) is a long-time New Tampa resident who was happy to bring his business home to his neighborhood.

Ghiya has worked as a pharmacist since 1992, first for Eckerd, then Publix. In 2009, he established Prime Rx Pharmacy in Seminole, in Pinellas County, in partnership with others who opened other Prime Rx pharmacies in St. Petersburg and Riverview.

When the partnership dissolved in 2012, Ghiya kept his Seminole location open while he commuted from New Tampa. Recently, his landlord notified him that he needed to move the pharmacy, so he decided to relocate all the way to New Tampa, cutting 3 hours a day out of his commute. He says he now travels less than three miles each way to work.

Vikas has been married to his wife, Harsha, for 32 years. Harsha manages the office and billing for the pharmacy, and also has a license as a pharmacy technician, so she can help her husband with that part of the business when needed.

Currently the staff also includes Joseph Ortiz, who is Prime Rx’s primary pharmacy  tech, and Ghiya says the staff prides itself on being both fast and accurate, plus going above and beyond what is typical at a corporate pharmacy/chain drug store.

“Here, customer service is a priority,” explains Ghiya. “We often recognize our customers and welcome them by name.”

While Ghiya is quick to say he would never criticize a fellow pharmacist, he says in a corporate environment, pharmacists generally are simply too busy to offer such personalized service.

Not so at Prime Rx Pharmacy.

In India, Ghiya says he was educated in Ayurvedic medicine, which is a holistic healing system developed more than 3,000 years ago. Ghiya earned a doctorate degree and practiced Ayurveda in India until 1988, when he moved to the United States. He explains that in the U.S., his doctorate in Ayurveda is not recognized.

So, Ghiya enrolled at St. John’s University in Queens, NY, and received his B.S. degree in Pharmacy in 1992. Then, he moved to Florida.

“Even back then, corporate pharmacy was looking at quantity, not quality,” he says. Instead, he chose to be an independent pharmacist.

Whether medicine is needed in a hurry or it’s just your regular prescription, Prime Rx Pharmacy will deliver it to your home (provided it is within a certain distance from the pharmacy) at no charge.

“We offer free delivery,” says Ghiya. “If the kids are sick and Mom can’t leave the house, we deliver.”

In fact, Ghiya says closing his pharmacy in Seminole hasn’t meant losing all of those patients as customers. He says that Prime Rx Pharmacy still delivers medications to Seminole twice a week.

“However, some come to this pharmacy,” says Harsha. “They say, ‘you drove to us for 10 years, now we can drive to you once a month.’”

The pharmacy also offers compounding, such as mixing creams for male and female hormones. Each patient requires a completely custom tailoring of estrogen, progesterone and/or testosterone, which must be done in a compounding pharmacy such as Prime Rx.

Prime Rx Pharmacy also provides compounding for veterinary medicines when needed for your dog or cat.

And, it offers free flavorings in certain medications, which is especially popular in some antibiotics for kids.

In addition to prescriptions, the pharmacy also carries durable medical equipment (DME) for sale, and some items are also available for rent, such as wheelchairs, canes and more.

Prime Rx also sells oil diffusers and essential oils, such as lavender and jasmine, to help people with sleep issues or anxiety, as well as CBD oil.

“We carry a broad spectrum of over-the-counter medicines and specialty vitamins, too,” says Ghiya, including the brands Pure and Ortho, which he says are high-quality vitamins.

“They work better and are absorbed better,” he explains. “You cannot find this stuff in Walmart, CVS or Walgreens.”

He says he and his staff also are happy to counsel patients on the best vitamins, especially when they are taking prescription medications.

Prime Rx Pharmacy also offers customized pill packaging, with medications sorted by the day and time a patient should take it. This is especially helpful for people who are chronically ill and take several medications at different times throughout the day.

“Instead of opening three or four different bottles, patients just open one blister pack,” Ghiya explains. “It helps the patient not to miss any pills. We count and make sure they get the exact dosage they need.”

He tells the story of one patient he recently helped with this type of packaging. “She took 18 medications, some once a day, some four times a day,” he explains. “That means she’s opening bottles 20-30 times a day. Instead, we give her a blister pack, and each one says which date and time to take it, so she knows if she missed a dose.”

Nine months later, he says that the patient’s health has improved.

“Her doctor asked her what she was doing to improve her health, and she said, ‘My pharmacist helped me,’” Ghiya says. “It’s because she’s not missing doses or taking extra doses.”

Now, he adds, she’s only on 12 meds and some of those are at reduced dosages.

“We like to make it fun and make people laugh when they come here,” Ghiya says. “People come in from the doctor and they’ve already waited and waited.”

Often, they’re stressed because they’ve received a bad diagnosis, so Ghiya and his staff always offer a listening ear, comfort and moral support.

“One patient moved here from New York and her daughter is diabetic and needs a particular insulin,” explains Ghiya. “She doesn’t have a car and was able to walk in to our pharmacy. Within two days, we took care of everything and delivered her special order to her. She said it was a totally different experience than at other pharmacies.”

He says the mom was nervous about using a syringe to give her daughter insulin, so he taught her how to use an insulin pen instead of a syringe.

“It’s easier to use and more accurate,” Ghiya explains. “We sat with her for 45 minutes to help her. We’re happy to do that.”

Pick Of The Week: The Liquor Shoppe! 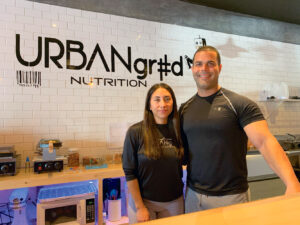