When Brianna, a Wesley Chapel teenager with Cerebral Palsy, graduated from high school in 2019, she could have rolled herself across the stage in the wheelchair she has been confined to for most of her life.

For Lisa Michelangelo, who had helped make that miracle possible at her Emerald M Therapeutic Riding Center in Brooksville, it was the type of moment she lives for and why she does what she does.

“It was really one of the most awesome things I’ve seen,” Michelangelo says.

Michelangelo, formerly a physical therapist in New Tampa, founded the Emerald M ranch six years ago. Named for the stone that Michelangelo says stands for “hope, renewal and growth,” Emerald M offers physical therapy that incorporates hippotherapy, which utilizes the movement of horses for rehabilitative purposes.

It has been a godsend for many like Brianna. It was the first time any of her Center Academy classmates had ever seen Brianna walk. Thanks to the therapy she received at the Emerald M Therapeutic Riding Center, Brianna made her graduation one of the most memorable days of her life — and the same can be said about many of those in attendance.

“I can’t express how much doing this has changed my whole perspective,” Brianna said in a video that played at the Emerald M’s second annual Derby Day fund raiser earlier this month at the Hyatt Place Hotel in Wesley Chapel. “It’s definitely life changing. I believe that wholeheartedly. It was one of the best decisions me and my family ever made.”

The fund raiser, like Brianna’s graduation, was a hit. It raised more than  $20,000 to help the Emerald M ranch continue to provide its unique form of therapy.

Usually held on the same day as the Kentucky Derby in May, the fund raiser almost didn’t happen this year, due to the Covid-19 pandemic.

The event was limited to 120 people, or half of capacity, and about 100 attended. Those not ready to venture out or concerned about the size of the crowd despite a host of coronavirus precautions taken by the hotel’s staff, the event also was streamed to provide a virtual experience.

Because most of Emerald M’s participants are more susceptible to coronavirus, the 20-acre ranch had to shut down in March, and re-opened in June. It features 10 horses, and more than a dozen volunteers.

The center, a 501(c)3 nonprofit, usually hosts two fund raisers a year — the Derby Day event in May, which was moved to September 5, and a gala dinner in October, which had to be cancelled.

“Derby Day did not offset the gala, but we did benefit with twice what we raised at Derby Day last year,” Michelangelo says. “That is tremendous. It puts us in a much better place moving forward.”

According to Michelangelo, hippotherapy, or equine-assisted therapy, is a growing and effective way to improve one’s coordination, balance and strength, especially in cases with children suffering from Cerebral Palsy.

According to the American Hippotherapy Association, Inc., and others, the horse’s pelvis and hips move in the same way as a human’s. By riding on a horse and maintaining balance, sometimes even riding sideways and even by sitting backwards, the movement of the horse is channeled to the brain and can enhance neuromuscular development.

Not only does it help build things like strength and control, it has various sensory benefits and also helps improve motor skills.

Sarah Clanton spent the first five years of her life with nothing. She existed chained to a bed in the Ukraine, and when she was adopted by Yvonne and her husband Jon Clanton, she could barely sit up by herself.

Sarah is one of the Emerald M Therapeutic Riding Center’s most successful patients, who despite being blind and mentally underdeveloped, is now walking with assistance and responding to instructions and showing major improvement in her motor skills, thanks to hippotherapy.

The center also offers therapeutic adaptive riding, which is more recreational and teaches someone with a disability horsemanship skills and how to ride.

Regardless of the help needed, Michelangelo says there’s a good chance they can provide it at Emerald M.

“I love what I do,” Michelangelo says. “It doesn’t feel like therapy. We’re out in a recreational environment, and once the kids get on the horses, I’m golden because they don’t ever want to get off.”

Emerald M Riding Center is located at 4022 Goldsmith Rd. in Brooksville. For more information or to donate, visit EmeraldMTherapeuticRidingCenter.org, or call (352)-244-7471. 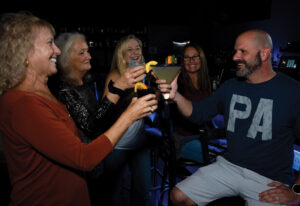