The Freedom girls swim team turned in another strong performance at the Class 3A-Region 2 championships last week, finishing second behind Sunlake by 33.5 points.

The performance qualified six of the Patriots’ swimmers in nine events for the State championships, which are being held in Stuart today. Finals begin shortly, for more information on how to follow along check out fhsaa.org.

“The girls were terrific,” said first-year coach John Olewski. “I couldn’t be prouder of their performance.”

Junior Michelle Morgan, who posted an Olympic Trials-qualifying time last year in the 500 yard freestyle, won all three of her events — the 500 free, 200 individual medley and as the anchor on the 400 free relay team — at the Regional meet and is one of the top contenders for gold at States. Morgan is seeded third at State meet in the 500 free after winning Regionals by 11 seconds with her time of 4:57.78. She also will be seeded third in the 200 IM.

Junior Carly Joerin was second in the 200 free and third in the 500 free, while senior Hannah LaBohn was third in the 50 free and 100 free. Both swimmers advanced to the State meet in those events.

Joerin also swam on the state-qualifying 400 free relay that won at Regionals by 11 seconds, along with Morgan, freshman Karis Kraf and junior Alexa Valdez-Velez.

The Freedom boys advanced one boys swimmer to States — senior Zachary Kopel, who won both the 200 and 500 free events at Regionals.

The Freedom High boys and girls cross country teams pulled off a team sweep of the races at the Class 3A, District 8 meet in Brandon on Oct. 31. Meanwhile, at the Class 4A-11 meet, the Wharton boys finished second.

The Wildcats earned their fifth straight trip to Regionals (Note-the top three teams and top four individuals who are not members of an advancing team all move on).

At the 3A-8 meet, Freedom senior Maria Melara and junior Keira Eckhardt finished 1-2, with Melara’s time of 21 minutes, 50 seconds bettering her teammate by 15 seconds. The Pats’ Katherine Vivas finished seventh.

In the boys race, all five Freedom scorers finished in the top 14, with senior Andrew Cory (17:18) leading the with his second-place finish. Senior Owen Smith (17:58) was fifth, followed by junior Brian Gardner in eighth, with a time of 18:24.

The Patriots’ girls finished with 26 points (the lower the team’s score, the better) in the three-team competition, while the Freedom boys beat second-place King 34-74.

The Freedom teams will compete at Lake Region beginning at 8 a.m. Saturday morning.

Wharton senior Jared Hammill, who set a school record at the Hillsborough County meet the week before, won the 4A-11 meet in 16:37.

The Wharton boys scored 59 points at the district meet, behind the District’s team champion Steinbrenner, which scored 31.

The Wharton girls team finished fourth overall, missing out on advancing by just seven points, but the Wildcats’ Brooke Reif and Alex Frye, both juniors, did advance to Regionals.

The Wharton teams will compete at Holloway Park in Lakeland, with the girls running at 7:30 a.m. and the boys running at 8 a.m.

The State championships for Freedom and Wharton are scheduled for Nov. 14 at Apalachee Regional Park in Tallahassee. 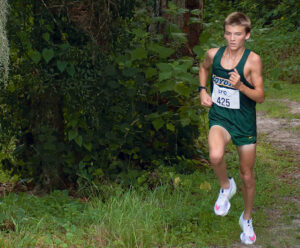