If tourism is going to bounce back from the Covid-19-ravaged 2020, a series of spikes, dunks, cheers and racquet sports will have a lot to do with it.

At least that’s how it looks to Pasco County tourism director Adam Thomas, who says that after a tough year for tourism around the world, events are returning to Pasco’s “sports tourism” sites, including the Wiregrass Ranch Sports Campus, Advent Health Center Ice and the Sarah Vande Berg (SVB) Tennis Center — all part of the county’s “Florida’s Sports Coast” branding.

Thomas says the three facilities have 14 events scheduled for the first two months of the year, with many more to come, as national governing bodies like USA Volleyball, USA Wrestling, USA Powerlifting and others look to take advantage of Florida’s open-for-business status and have eyed the Wesley Chapel-area to hold events.

“We are just now getting back to normalcy,” Thomas says, despite rising Covid numbers in Pasco, in Florida and around the nation. “We are looking at sports tourism in 2021 to really get us back to where we need to be.”

One event that won’t provide as much help as originally expected is Super Bowl LV, which is being played at Raymond James Stadium in Tampa on February 7. Generally, a huge event like the Super Bowl would have a major economic impact on nearby Wesley Chapel, with visitors staying in local hotels and eating and shopping at local restaurants and stores.

Thomas thinks Wesley Chapel will still enjoy some benefit from the Super Bowl, but in October, Pasco backed out of plans to spend $250,000 on a Super Bowl sponsorship and instead use that money for something more likely to bring a bigger return to the county.

So, while the Big Game won’t make as much of an impact, hundreds of little ones will — and that’s fine with Richard Blalock, the CEO of RADDSports, which runs the Wiregrass Ranch Sports Campus, thanks to a public-private partnership between Pasco and RADD Sports.

The 98,000-sq.ft. AdventHealth Sports Arena will host a variety of club sporting events in 2021, bringing hundreds of teams and players and their parents’ wallets to Wesley Chapel.

The January calendar was filled with volleyball tournaments and gymnastics meets. Volleyball and gymnastics club seasons will roll into a basketball club season in the spring, and then the camp season over the summer. The Sports Campus is already proving to be responsible for a lot of hotel room nights and money spent at Wesley Chapel restaurants, malls and shopping centers, as nearly every weekend is booked through August and even Covid-plagued 2020 proved to be a success.

“We are not one-sport-specific, and that helps us,” Blalock says. “We made that decision by design. We can run a multitude of events here. As one season ends, another is starting.”

Blalock says in August and September of 2020, the first six weeks the Sports Campus was open, its events were responsible for 1,800 hotel room nights and just over $150,000 in sales, resulting in a $1.2-million indirect impact on the local economy.

He doesn’t have numbers yet for the rest of 2020, but Blalock says he expects to exceed those numbers in 2021. He says this while staring out his office window at construction workers laying masonry blocks on the fourth floor of the Residence Inn by Marriott hotel, which is being built adjacent to the arena on the Spots Campus site and is expected to open around the first week in August.

But, 2021 also is planned to include  an NFL-style combine for pro football hopefuls, organized by former Tampa Bay Buccaneers wide receiver Yo Murphy, as well as the possibility of European soccer teams camping here prior to their fall 2021 seasons.

Thomas says the Sports Campus isn’t the only local venue to have a slew of events booked to meet pent up demand. AHCI currently is hosting a six-week United States Premier Hockey League (USPHL) camp — a college and pro showcase with hundreds of players staying at Saddlebrook Resort and playing games at AHCI — as well as in Ellenton and Brandon.

The USPHL’s Hub City concept is designed in part to make up for the loss of games and exposure events for players last year, especially from hockey areas hit particularly hard by Covid-19, like the northeastern U.S.

Because so many events were cancelled last year and so many seasons went unfinished,  Thomas anticipates eager event organizers to be heading our way.

The county won’t recover in one year, Thomas adds. He believes the Covid-19 vaccine will help make people more comfortable when it comes to travel and attending larger events, but that change will take a while. While 2021 is expected to put the Florida Sports Coast back on track, Thomas says the tourism industry is looking at 2023 before a full recovery can probably be expected.

“It’s going to take some time,” he says. “We’re still licking our wounds.”

When the pandemic hit last year, the county was coming off a record-setting February. March began the nosedive, and when the state was shut down for much of April, the county saw its tourist tax revenue drop to below $100,000 for the month, down from $430,000 in tourist tax collected in April 2019.

There is some good news, even if it is anecdotal — Thomas says the last weekend of 2020 saw 6.2 -percent growth, with almost 40 percent hotel occupancy. “We had a really good week,” he says. “Hopefully we’ll continue to see that.”

In fact, Lisa Moore, the market director of sales for the Hilton Garden Inn Tampa-Wesley Chapel on S.R. 56 says, “We’ve been at or near 100% occupancy every weekend since the Sports Campus opened. It (2020) was a tough year, but things are looking better now.” 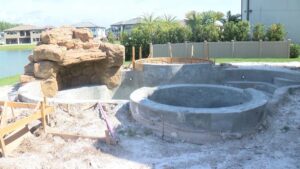 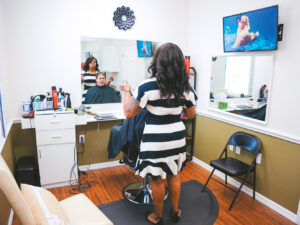