The Best Of The Latest New Tampa Town Hall

If you’re into local government, then you have to be impressed with the roster of dignitaries that District 7 Tampa City Council member Luis Viera lined up for his latest New Tampa town hall, held last month at the Freedom High auditorium.

Here are four takeaways from that event:

News Flash! — Traffic in New Tampa stinks! That was the message from those who got a chance to speak at the town hall. Whether it was congestion, unpaved roads (e.g., New Tampa and Tampa Palms Blvds.), people speeding or a lack of transportation options — even light rail was brought up! — local residents had a lot to say.

Unfortunately, there really aren’t a lot of answers that don’t revolve around the city crying poor. The Supreme Court striking down the All For Transportation referendum money (a one-cent sales tax) continues to leave a mark. That money would have fixed a good portion of New Tampa’s problems..

Not everyone was buying the referendum excuse. Local transportation activist Dr. Jim Davison was his usual feisty self, basically accusing the city of not using the gas and other taxes New Tampa residents pay to fix their transportation woes while blaming the Supreme Court decision instead.

“There’s millions of dollars there,” Dr. Davison said, to applause.

Davison also criticized the city for taking the East-West Expressway (aka the E-W Rd.) off the Hillsborough Metropolitan Planning Organization long-range plan. The debate over an E-W Rd. — which would have connected the New Tampa Gateway Bridge (that connects West Meadows to Tampa Palms) to I-275 — goes back more than 20 years. It was killed in 2008 by the Tampa-Hillsborough Expressway Authority but had remained in the MPO’s plans until 2017.

Davison also said he has been asked to reorganize the old New Tampa Transportation Task Force, of which he was a co-founder more than 20 years ago. He think it’s time for a “heart-to-heart” talk about what is happening in New Tampa and basically what the city is and isn’t doing about it.

“Because what is happening now, this ‘If you vote for the one-cent sales tax we’ll build all this stuff,’ that’s extortion,” Davison said, to more applause.

Did Davison kick off his 2022 campaign for Tampa City Council or the Hillsborough County Commission at the town hall? It kind of sounded like it.

Davison has run twice for the County Commission and lost, and ran for City Council in a 2016 special election to replace Lisa Montelione that launched Viera’s political career. Davison won 30 percent of the votes (compared to 20 percent for Viera) in a crowded primary field, but Viera won the run-off by 65 total votes.

So, is Davison ready for another run? Hmmmm.

Mayor Castor told the audience that she has signed off on the planning and development contract for the All Abilities Park, which also has been called the Sensory Park and will be built at the New Tampa Recreation Center.

“That should be started very very soon, so we’ll see another outstanding park out here in the New Tampa area,” Castor said.

Peter Gamborta of the Rotary Club of New Tampa said the club is ready and eager to begin fund raising for the park, as well as improvements for the New Tampa Rotary Dog Park, for which they raised $27,000 to build in 2015.

Castor also said the planning department threw dynamite on its permitting process, blowing it up and starting anew with the focus on new technology and more efficiency and effectiveness. That improvement yielded $4.5 billion in development in 2020, up from $3.4 billion in 2019, despite Covid.

And, despite all the complaints, the mayor insisted that her administration is working on transportation and public safety issues. “One of the reasons I ran for this position…is that this city is going to change more in the next 10 years than it has in my lifetime,” Castor said. “We really have one opportunity to create the city we want Tampa to be, and to hand that off to the next generation. We’re very excited to be a part of that.” 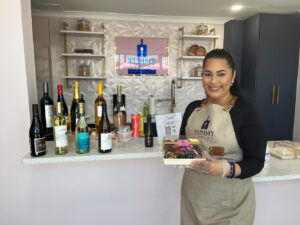