CYPRESS CREEK
COACH: Mike Johnson
LAST YEAR: 3-7, lost to Tampa Catholic 55-7 in the first round of Class 4A playoffs.
KEY RETURNEES: Owen Walls  (Sr., QB, 1,233 yards, 13 TDs in 2020), Andrew Burgess II (Sr., RB, 119 yards, 1 TD), Dontrell Clerkley (Sr., WR, 427 yards, 6 TDs), Merrick Simmons (Sr., WR, 331 yards, 6 TDs), Dernere Jones (Sr., WR, 166 yards), Colton Corrao (Sr., PK), James Cleary (Sr., OL/DL), Austin Slusher (So., OL/DL), Vincent Tre (Jr., LB).
TONIGHT: The Coyotes host Bonita Springs at 7:30 p.m.
REST OF THE SCHEDULE: The two toughest, and most important games (because they are 5A-District 9 games) will be at home, against Nature Coast Tech (Sept. 17) and Zephyrhills (Oct. 15).
GAME TO WATCH: Cypress Creek and nearby Wesley Chapel have only played once, in 2019, with the Wildcats posting a 19-0 win. On Oct. 29, they play again, and this time it’s a district game and could have some meaning. Time to rev up this rivalry!
THE SKINNY: With a young and  unproven offensive line and loads of talent at quarterback and receiver, we might see a version of Air Johnson this year. The Coyotes put up a 45-0 win over Bishop McLaughlin in last week’s preseason game, not a bad way to kick it off. Clerkley and Walls should click, and Simmons and Burgess II are versatile athletes. Clerkley, also a standout at defensive back, caught TD passes in five of the last six games in 2020. Johnson said in the spring he was expecting freshman WR Jaelen Collins to add to the firepower. Defensively, transfer middle linebacker Niko Huitz was a standout in the spring and could play a big role in 2021. Cypress Creek has one of the top kickers around, senior Colton Corrao, who was ranked No. 13 in the country by Kornblue Kicking, a recruiting company that holds camps, trains and ranks kickers.

COACH: Tony Egan
LAST YEAR: 5-5, lost to Chamberlain 40-0 in first round of Class 5A playoffs.
KEY RETURNEES: Ethan Harper (Sr., QB, 699 yards, 7 TDs in 2020), Nehemiah Morgan (Sr., WR/S, 399 yards, 3 TDs), Jaylan Blake (Sr., RB, 485 yards, 4 TDs), Max Hembrecht (Jr., OL/DL), Ryan Warren (Jr., OL/DL), Briac Riles (Sr., OL/DL), Josh Poleon (Jr., LB), Ayden Roysdon (Jr., LB), Yael Diaz (So., LB).
TONIGHT: at Sunlake at 7:30 p.m.
REST OF THE SCHEDULE: The Wildcats probably have the second toughest schedule in the county, behind Wiregrass Ranch. It will be tough to catch up if they come out of the gates slowly.
GAME TO WATCH: The Nature Coast Tech game on Oct. 1 may be the most important, but the Sept. 3 game against Wiregrass Ranch might be the most fun. The neighborhood rivals skipped last year’s game, so this should draw a boisterous crowd.
THE SKINNY: Rain washed out a ton of practice time for the Wildcats, and the 27-0 preseason loss to The Villages is not a promising sign. But the Wildcats have some nice pieces on offense, including the biggest offensive line Egan has had in his five seasons at the school. If Harper converts some of the promise he showed last year, and Morgan breaks out, the Wildcats should put up some points. Defensively, Wesley Chapel has excellent linebackers in Poleon and Roysdon, and the addition of Tampa Bay Tech transfer Jorden McCaslin will elevate that group. There have been some injuries, however, that could hamper the team’s depth.

The Wildcats have gone 5-5 the past three seasons, and Egan is tired of .500 and is setting the bar higher.

“I’m expecting to compete for a district title,” he says. “We have to get in the playoffs. It would be nice to win the first playoff game here.”

COACH: Mark Kantor
LAST YEAR: 4-5, had to forfeit playoff game due to Covid-19.
KEY RETURNEES: Rocco Becht (Sr., QB, 1,550 yards, 18 TDs in 2020), Corneil McCrary (Sr., RB, 453 yards, 3 TDs), Jr. Kenneth Walker (527 yards, 6 TDs), Bryson Rodgers (Jr., WR, 47 catches, 710 yards, 10 TDs), Izaiah Williams (So., WR), Abram Beer (Sr., LB/SS), Nate Kidd (Sr., LB), Logan Ridolph (Sr., OL/DL), Christian Loaiza (OL/DL).
TONIGHT: The season opener against Hernando has been postponed with the hopes of rescheduling.
THE REST OF THE SCHEDULE: Yikes! The Bulls play two teams that advanced to the state semifinals last year (Mitchell and Tampa Bay Tech), another team that has won multiple state championships (Armwood) and three other teams that finished 9-3, 7-2 and 6-1 (Zephyrhills, Wharton and The Villages, respectively). Did we say yikes already?
THE SKINNY: The offense is loaded, with Iowa State commit Becht throwing to Rodgers (a certain 5-Star recruit who already has Alabama, Florida, Florida State and Georgia among many suitors) or Williams or newcomer Malachi McLaughlin. All good choices. Walker and McCrary are 1,000-yard threats in the backfield, and tackles Loaiza and Ridolph bookend a very promising offensive line. The Bulls scored at least 41 points in every win last year. Wiregrass Ranch should score points this season, but the Bulls were shut out last week by Clearwater Central Catholic. More disconcerting was the score — 37-0. The defense has some questions that need to be answered after a bumpy 2020 and a spring game where it allowed 36 points to Berkeley Prep.  Linebackers Kidd and Beer will try to shore up a unit that is shallow upfront, but can place talented athletes in the defensive backfield. If the defense can take the next step, big things could await the Bulls. 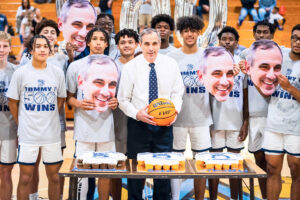