Three major projects promising to transform Wesley Chapel have been in the works for years.

One of them, the KRATE container park at the Grove, launched last month to great reviews and is, arguably, the hottest spot in Wesley Chapel at the moment. Another, the Town Center area in Wiregrass Ranch, is still more than a year off.

Avalon Park Group/sitEX announced in June it has entered into an agreement with Lema Construction to start construction at Downtown Avalon Park Wesley Chapel. The budding community will break ground on Thursday, July 14, on the first phase of its downtown area.

The groundbreaking ceremony, to be held from 4 p.m.-6 p.m.,  will feature refreshments as well as performances and entertainment by Jazz Under the Starz, The Wesley Chapel Theater Group and the Pasco County Fine Arts Council.

The three-story, 73,067-sq.-ft. mixed-use building will include 40 multi-family apartments and 23,720 SF of commercial/retail space on the ground floor.

The commercial/retail space will include a 12,000-sq.-ft. food hall to be called the Marketplace at Avalon Park, as well a co-working space called “The 5th Floor.”

“This phase of construction really helps us move even closer to that vision of building a place where families can build memories and traditions together in a town they can call their own,” said Beat Kahli, the CEO of Avalon Park Group/sitEX, in a press release. “And, while this may not be the most cost-effective time to begin construction, we feel like it is important to continue on to the next step in developing our vision for Avalon Park Wesley Chapel.”

Additionally, a 2-acre community park with an amphitheatre will begin construction later this summer, following permitting. Construction of both the mixed-use building and the park are scheduled for completion in late 2023.

Kahli says he is investing more than $700 million in the downtown project — with a $33-million incentive package from Pasco County.

Construction of Downtown Avalon Park Wesley Chapel actually began in 2018, with the addition of the Pinecrest Academy K-8 Charter School, which is currently under construction in its second phase. With nearly 600 students already enrolled, the current construction will add approximately 600 6th-8th grade student stations. 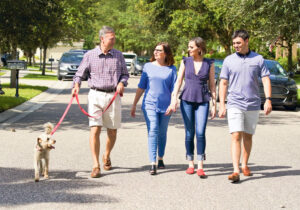