Congratulations go out to The Fat Rabbit Pub, located at 16029 Tampa Palms Blvd. W. (in the City Plaza at Tampa Palms shopping center) for celebrating its fifth anniversary. Always near the top of the New Tampa rankings in both our Reader Survey and with yours truly, Jannah and I visited Fat Rabbit for its anniversary celebration on July 16.

Executive chef Cole McBride, who has been coming up with the Fat Rabbit’s unique better-than-bar-food dishes from Day One, offered a number of specials for the day, including those top-rated wings topped with “Apocalypse” wing sauce (which has earned an 8/10 on the “heat” scale), a red velvet cake/cheesecake dessert special (photo, bottom, shown with the Rabbit lager special served in a 5-Year Anniversary glass, while supplies last) and a new burger that Cole says is being added to the menu: “The Rabbit 13 (photo below),” which is a short rib and brisket patty topped with tortilla strips, roasted poblano peppers, pepper jack cheese and pico de gallo (shown on the side), topped with a creamy queso cheese sauce and served with your choice of the greatest tater tots in our area, crispy fries or the awesome, super-crisp onion rings shown here for just $1 more.

Perhaps best of all (at least for me) is that Cole says he should soon be bringing back his weekly fresh fish specials. So good! 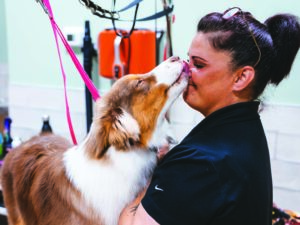