Wesley Chapel High’s Mark Leonard coaches one of the top girls soccer programs in Pasco County, but he jokes — kind of — that no one seems to agree, at least until the season is over.

In the preseason, though, it always seems that mum’s the word.

“For a few years, it was Pasco High and Nature Coast that were talked about as the best teams, now it’s Cypress Creek and River Ridge,” Leonard says. “But, that’s okay.”

The Wildcats, 13-8-1 last year, have won district titles four of the last five seasons, including last year when, as the No. 3 seed, they knocked off No. 2 Cypress Creek and No. 1 River Ridge in the District 5A-6 tournament to advance to the State playoffs. The ‘Cats are in District 5A-7 this year.

There are many secrets to the Wildcats’ success. They have an elite goal scorer in junior forward Tatum Moore, who has seven of the Wildcats’ 13 goals (after scoring 30 last year to go with 12 assists). They also have veterans like seniors Emily Doonan (F), Nemsis Arroyo (MF), Alyssa Roberts (F/MF) and Kiera McFeron (F/MF), who combined for 32 goals and 21 assists last year.

Senior captain Lexi Mangione is a steadying force in the middle, and fellow captains Marianna Portillo and Kacey Snead help anchor the defense.

So, despite having a talent like Moore on the roster, Leonard says the biggest secret to the Wildcats’ success is turning in a total team effort.

“They are completely unselfish and there is no sense of entitlement with this group,” Leonard says. “Everyone contributes.”

The Wildcats are only off to a 3-3-1 start, but history tells us they will be a force to be reckoned with by the end of the season. Last year, the Wildcats went 4-1 in their last five games. The year before that, after a 5-8-1 start, they finished 5-1 in their last six games.

“Right around midseason every year, we really start to click,” Leonard says.

Cypress Creek, a 3-2 loser to Wesley Chapel in last year’s Class 5A, District 6  final, would like to reverse that trend.

The Coyotes, 4-2 this season, return one of the county’s top 1-2 tandems in junior forwards Ashley Souers and Ashley Olds. The duo has seven goals each and have assisted on four others already, after combining for 34 goals and 11 assists in 2020-21 when they led the Coyotes to an 11-7-1 record.

Senior Abigail Pittman, who scored four goals last year, and the Fulop sisters — senior Hannah, junior Jordan and freshman Lindsay – are all expected to be key contributors, and sophomore Avery Blevins has scored four times. Keeper Alex Capocy, who had 81 saves and a 1.72 goals against average in 2021-22, is expected to post similar numbers in 2022-23.

Are The Bulls Charging Back?

The top team in Wesley Chapel the past few years has been Wiregrass Ranch High, and while they did suffer some losses on their vaunted defense — allowing only 10 goals while going 15-3-2 last season — the Bulls are poised to contend for the playoffs again.

It has been feast or famine for the Bulls, who are 3-2 and have scored eight goals in each of their wins, but been shut out in both losses. Isabella Maldonado has nine goals after scoring just three all of last season. In fact, last year’s leading scorer only had 10, a mark the senior midfielder seems poised to eclipse.

Senior Siena Booth has four goals, and junior Sydney Spitzer already has matched her season total of a year ago with three goals. Seven different Bulls have scored, many on assists from Aixa Barrera and Kennedy Bequette, who each have four.

Defense has been the Bulls’ calling card in past seasons, having yielded only 53 goals in their last 89 matches dating back to 2018.

Speedy senior defender Ashtyn Warner, one of the team’s captains, heads up the defense this season, and is also dangerous on the counter attack.

“She is not only an incredible athlete, but an amazing soccer player,” says coach Chloe Marie Mercado. “(Ashtyn) is such a versatile player that can move to different positions and continue to do such a great job on the field. She is able to attack and get forward which is something not a lot of defensive players are capable of doing, so that is fun to watch.”

If freshman Caitlynn Figueroa can mind the nets effectively, the Bulls appear equipped to make a run at a fifth straight district title.

Hurry And Play Our “Big Game” Squares! Prizes For The Winners! 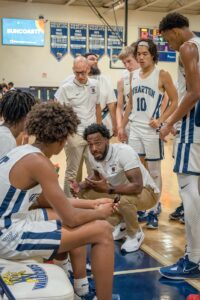