Like most people, former Tampa Bay Buccaneers placekicker Martin Gramatica worried about what, if any, future maladies might be lurking in his body. So, when he heard a commercial on the radio for Life Guard Imaging, which promises to help answer those questions with high-tech full-body scans, he made a mental note to give them a call.

However, he never did.

Instead, it was a chance meeting — with a diehard Kansas City Chiefs fan — a few weeks later on an airplane, that put the former Buc on a path to not only get himself scanned, but to join the team at Life Guard Imaging and start helping to save other people’s lives.

That Kansas City Chiefs fan was Frankie Maldonado, the director of operations of Life Guard Imaging, which is located on Rocky Point Dr. in Tampa, off the Courtney Campbell Cswy.

As a Bucs sponsor, Maldonado was on a team-sponsored flight sitting in the row ahead of Gramatica, who does color commentary for the Bucs’ Spanish flagship radio station WTMP-FM 96.1.

Gramatica’s wife Ashlee overheard the conversation and told Martin it was the guys from the radio commercial.

“Frankie is a huge Chiefs fan and was wearing his Chiefs shirt, so I had to say something to him,” Gramatica said. “We ended up hanging out that weekend and had a great time. We landed back in Tampa on Sunday, and I had my scan on Tuesday, and it kind of went from there. Then, Eric (Shuman, Life Guard marketing director), and Frankie asked me if I wanted to come on board.”

Gramatica is now the vice president of business development for Life Guard Imaging, a company that specializes in preventive screenings in order to find heart disease, cancer and other illnesses early enough that patients and their physicians can take the proper steps to correct them.

At Life Guard Imaging, you are scanned from your shoulders to the base of your pelvis. A registered CT Technologist slides you through a low-radiation, high-resolution CT scanner, creating 3D images of your internal organs, which are then examined by a team of Board-certified Doctors of Radiology who can help aid in detecting deadly diseases before it’s too late.

The scans can help detect hundreds of issues, but among the most prominent are lung cancer (which kills more men and women than any other cancer), liver disease (which accounts for 2 million deaths per year) and abnormalities in your chest, abdomen or pelvis.

Maldonado describes the first scan as your base, and although you can get just one scan, he says yearly scans can reveal any dangerous year-to-year changes. He compares it to getting a mammogram.

Maldonado took a job at an independent imaging facility in Atlanta in 2017, and knew then he wanted to bring scanning services to as many people as possible.

He has seen patient scans reveal early-stage pancreatic cancer — the same cancer that killed his father, prominent Maryland surgeon Dr. Benjamin J. Maldonado, Jr. — allowing this deadly type of cancer to be caught in time. Another patient had a cardiac calcium score so high it was revealed that three of his four main arteries had 90-percent blockage. Triple bypass surgery saved him from an inevitable heart attack.

Life Guard Imaging is one of only five places nationwide that offer this type of full-body-scan program, and the job is extremely gratifying. Gramatica says there are plans to expand to other locations in Florida.

“I’m having so much fun with it,” Gramatica says. “Where else can you say you are saving people’s lives?”

That’s why Gramatica didn’t want to just be a spokesman for the company. He wanted a larger role — “I wanted to be all in,” he says. “I didn’t just want to do a couple of commercials and put my face and name out there and be done with it. As VP of business development, my job is to get the word out there and let people know what we do, because what we do is important.”

For Gramatica, knowing that he’s healthy is important. He owns his own business, coaches all three of his kids — 14- and 16-year-old boys and a 10-year-old daughter — in soccer, has been doing Bucs radio with his brother (and former USF kicker) Santiago for five years and was recently named the head coach of the new Tampa Bay Strikers men’s and women’s teams that will play in the National Indoor Soccer League, which will play its home matches nearby at the USF Yuengling Center.

“When I first thought about getting scanned, my stomach had been bothering me,” Gramatica says. That checked out fine, however, and his scans have only revealed a few wear-and-tear issues from a lifetime of playing soccer and kicking field goals.

“It gave my wife and I tremendous piece of mind,” he says. “It’s extremely valuable to know that everything is fine. And, if anything does develop, we’ll catch it early.”

Life Guard Imaging is located at 3001 N. Rocky Point Dr., Suite 185. For more info, visit LifeGuardImaging.com or call (813) 524-1010. If you mention this story or the ad, you will receive a heart scan and coronary calcium score absolutely free. 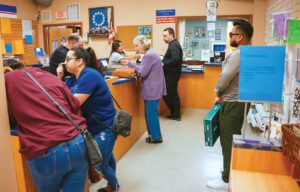 Wesley Chapel Postal CPU Closes, But Is It Gone For Good?