Wharton High’s drum line has brought home the “W” in a local battle for the best, held on Oct. 15 as part of the King High School Lion’s Pride Marching Festival.

While the festival, established in 1997, primarily helps high school bands sharpen their skills on the, ah, march to the height of the season, it allows drum lines the opportunity to choreograph a performance to show off their talents, too, in the Lion’s Pride Battle of the Drum Lines.

When the Wharton students asked director Marques Rudd if they could plan a routine for the competition, he signed them up. They did the rest.

Percussion captain Josh Benalcazar and other percussion leaders — including AJ Coveyou, Clara Riusech and Jeya Williams — came up with music, visuals, and choreography. Then, they planned rehearsals for all 18 members of the school’s drum line.

In addition to playing rhythm and cadences on snares, tenors, bass drums and cymbals, they created choreography to determine their placement on the field, and added visuals such as dancing, swaying, and moving in eye-catching and fun ways.

Wharton won the Lion’s Pride Battle for the first time ever. The Wildcats stunned five-time defending champion Strawberry Crest in the semifinals, and then were chosen as the best drum line in the finale against Spoto.

“It was crazy to me that we were able to put this together entirely student-led,” Benalcazar says proudly. “We had to really think outside the box and be creative.”

Rudd agrees that the students’ creativity is what propelled them to take home the competition’s bragging rights.

“Their interaction with the crowd was awesome,” he says. “They even threw in some cartwheels and something from the Cha Cha Slide.”

Rudd says he’s proud of the students and the fact that they came together to create something they weren’t required to do as a class assignment. He noticed their hard work, and it paid off for them.

“It was surreal when we won and they called our name,” says Josh. “It took a minute for it to process in my brain. It was a dream for me to be able to win such a big competition.” 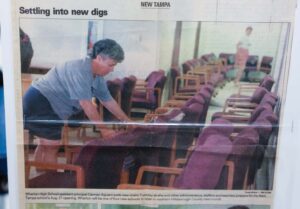 Do You Remember When Wharton & Benito First Opened? I Do!